Books for mini-nerds… that are not superheroes or dystopian!

There is a certain stereotype that nerds only read comic books or fantasy genre books, and also the reverse- you can’t really be a geek if you don’t read those genres.  I’m a HUGE nerd, but don’t particularly enjoy hard fantasy or sci-fi, and my comic book reading would make those hard-core “you’re fake geek girl” nerds roll their eyes (*cough* old school Archie *cough*).  I know that there are lots of others out there like me, and some of them could be that tween struggling to find a book they can really identify with.  One that is equally nerdy/geek and set in “real life” not fantasy or dystopian future. Here are a few of my favorites from the last few years.

Fourteenth Goldfish by Jennifer Holm– Eleven year old Ellie gets a shock when there is a knock on her door one day. It’s her famous scientist grandfather…. or is it?  Could this 13 year old boy really be who he says he is?  Did her grandfather really discover the “fountain of youth” and de-age 60 years?  Ellie and grandpa Melvin (who by day has to attend school again since he’s 13 now) must break into his old lab to recover his research and return Melvin to his true age.

Great Greene Heist by Varian Johnson– (Cue “Mission Impossible” music) The school election is going to be rigged… and not for the best candidate to win.  Reformed bad-boy Jackson Greene devises a plan to un-rig the election, but he needs a team.  This book is like “Ocean’s Eleven” for the tween set.  Each member of the con brings their own specialty, and their own quirks.  Diverse characters, diverse interests, and lots of fun and funny action. 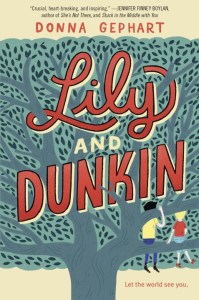 Lily & Dunkin by Donna Gephart- In Middle School no one truly fits in.  For Dunkin, the new kid, he tries. He joins the basketball team (since he’s the biggest 8th grader) and puts up with the teams bullying of other students. He’s too afraid they will find out his secret- he’s bipolar. Lily was not born Lily. She has told herself that 8th grade is the year she will transition to being Lily in public.  Most of her family is finally behind her, and eventually her father will come around.  The two meet before school starts, keeping their secrets.  Throughout a very strenuous year for each of them they find that you don’t need to keep secrets from your true friends.

Escape from Lemoncello’s Library by Chris Grabenstein– Kyle is a huge gamer… especially tabletop games where he competes against his larger and smarter older brothers.  Kyle and his friends win a special night in the new library constructed by his favorite game designer Luigi Lemoncello.  What they don’t expect is to be locked in and their only way out is to work together to solve the puzzles and play the games. 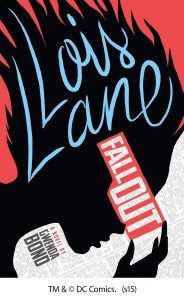 Lois Lane series by Gwenda Bond– EVERYONE knows what Superman was doing in highschool as Clark Kent.. but what was Lois Lane doing? Gwenda Bond brings Lois into the 21st century as a high school journalist that just can not stay out of trouble. She moves to Metropolis, startsa  new school… and well uncovers nefarious doings as only Lois Lane can! She gets a little help from her online penpal- “SmallvilleGuy”.

I Am Princess X by Cherie Priest– Two young best friends (Libby & May) create their own comic book character (Princess X), a secret between just them. Then Libby is riding in a car with her mom when it goes over the edge… Princess X dies with her.  But years later images of Princess X pop up around town… and May is convinced her friend is still alive and trying to reach out to her.  The book is a wonderful story of friendship, and includes their Princess X comics within the novel, bridging the past and the future… and helping May get to the truth.

Obligatory Instagram food shot. Enjoying a nice solo lunch while Todd is conferencing. Years ago, I'd never go to a restaurant solo..now I'm a badass not a loser (I never was, stupid brain!)
The O's fan in me a wee bit excited about our view this week. The not so solid sleeper not excited about the other 3 Windows in the corner suite over looking lots of traffic. 😊
Just another lazy Sunday in greyhound land.
%d bloggers like this: